A REC GENERATION AND TRACKING PLATFORM USING SECURE DATALOGGERS – Project conducted and established for a Government in the Middle East.

The goal of the REC program is to enhance the solar energy base within the country by the Government and promote the green beneﬁts of solar energy. As per the scope of work, Sunpulse was asked to calculate the levelized cost of electricity (LCOE) for solar power plants located within the country according to a number of stated assumptions and detailed solar yield simulations.

Sunpulse simulated the solar output using industry standard methods (such as PVSYST) for a typical crystalline silicon solar power plant situated in the country for both utility scale and commercial rooftops.

This simulation formed the basis for a calculation of the bounding range for REC certiﬁcate prices. In order to calculate the range of REC prices a comparison analysis was conducted to compare the price of electricity that was generated by a solar power plant without any tariﬀ and the current price of electricity that was listed from a natural gas power plant, also without tariﬀ.

The ﬁnal initial price of the REC was then calculated as a technical suggestion to the Government. The Government would then consult internally  to determine the bounding range of REC prices.

As a conclusion to this first step, the Government has yet to introduce this REC price. Although this is scheduled to take place once the scheme begins.

As a further and main objective, Sunpulse K.K. developed the REC Generating, Trading, and Retirement platform for the Government. The platform can either make use of a Secure-Datalogger (in order to harvest data directly from the source of the solar power production, i.e. the solar plant itself) and-or make use of data made available from Monitoring Software provided by the Government. In addition, solar power plants under a certain size are exempt from implementing a physical datalogger, and documentation review by the government will be conducted for these to enter the scheme.

REC’s are public tokens on an open standard, within the country. This open standard is freely interoperable on the largest and most developed token trading ecosystem using smart contracts on the planet, the Ethereum Blockchain. Sunpulse K.K. developed the REC platform on the Ethereum testnet network.

In the case that an REC has been MINTED via the above described process and/or the datalogger process described here-after, the REC can be traded amongst users within the Country using the ERC-721 Non-Fungible Token (NFT) standard directly through the Platform.

This allows for the transfer of NFT’s according to certain conditions set by the governing smart contract, which greatly reduces any gaming of the REC Platform and also guarantees that a certain REC token price level is maintained for the Government within their country jurisdiction. These were parameters requested by the Government at the beginning of the pilot phase of the project.

Some examples of the condition sets that can be set in the ERC-721 standard, this means that transfers may be initiated by:

● The owner of an NFT

● The approved address of an NFT

● An authorized operator of the current owner of an NFT

Additionally, an Authorized Operator entrusted by the Government may set the approved address for an NFT.

Sunpulse envisions that the Ministry of Energy becomes the Authorized Operator of this smart contract/REC. This provides a powerful set of tools for wallet, broker and auction applications to quickly use a large number of NFTs. 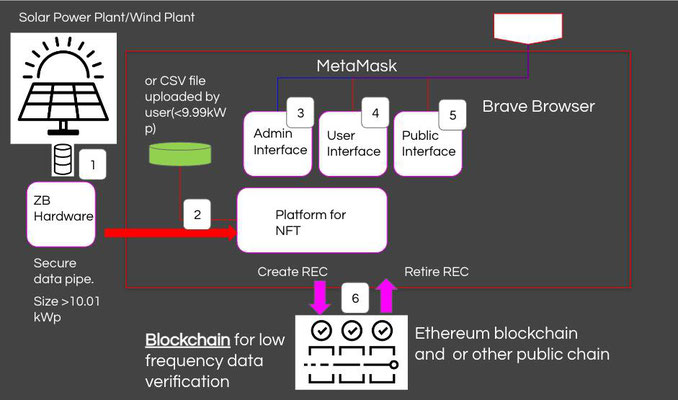 Further, Sunpulse has developed a Secure-Datalogger that harvests solar information data directly from the power plant. This, in combination with the REC-Platform, ensures that the information provided by the solar plant (ie, solar power production) increases trustworthiness of the datapipe.

This is a “ﬁrst in the world” system linking secure IoT to blockchain smart contracts for the generation of Renewable Energy Certiﬁcates (RECs) that can be traded via a token that employs the Ethereum Non-fungible token (NFT) standard.

The REC Platform developed by Sunpulse K.K. can be used without the Datalogger and-or directly using Monitoring Software provided by the Government/Operating Authority.

RECs can be viewed directly through a Public User Interface directly in the Blockchain Explorer: 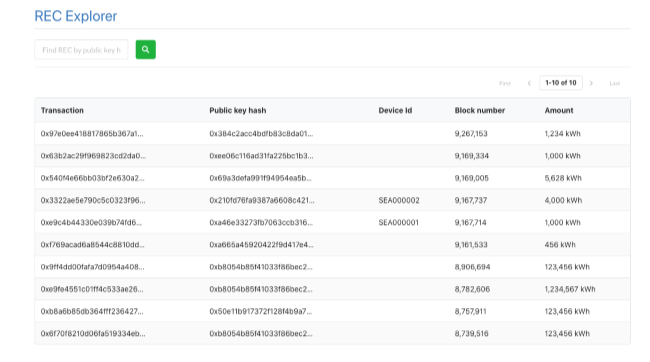 This shows the details of the REC created in the Blockchain. Details in the Interplanetary File System (IPFS) hash as well as a data backup of information uploaded about this solar install and the power produced is linked to this transaction in the Blockchain. 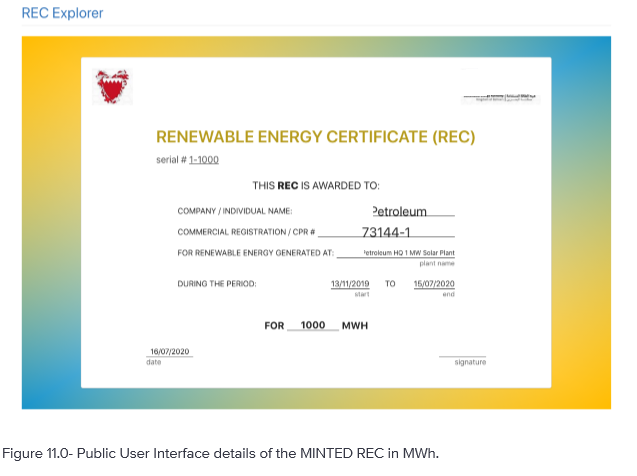 This Renewable Energy Credit Generating, Trading and Retiring Platform can be deployed with any Government of the World looking at establishing a REC system within the Country, with rapid integration, depending on requirements.

If you would like to discuss the datalogger, the platform and other various aspects of the system please reach out to us at info at sunpulse dot net. And also have a look at our datalogger page here.